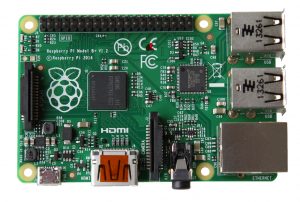 The Raspberry Pi is now two years old and in it’s lifetime it has found itself deep under the sea, controlling complex machinery and floating in space. The initial goal of the project, to educate children in Computer Science has revolutionised the education landscape with children and adults learning more about Computing and Electronics.

Introducing the Model B+
At 7am BST the Raspberry Pi Foundation officially launched the new Model of the Raspberry Pi. The Model B+, is considered the final version of the Model B and uses the same Broadcom BCM2835 SoC that is present on all of the previous Raspberry Pi revisions. By basing the Model B+ on an existing architecture the Foundation have smartly retained compatibility with the existing software and projects that have been previously developed.
The Model B+ provides a more refined product based on feedback received from the community, and here are a few of those refinements.

Hardware
Form Factor
The B+ measures 85 x 56 x 17mm in size, slightly smaller than the original form factor. With this size reduction comes an improved layout and organisation of the board and looking around the board there are a number of changes present. 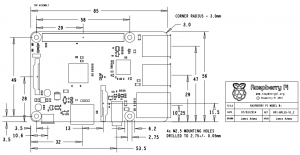 Board Layout
Most noticeably is the layout of the ports. Instead of being dotted around the perimeter of the board, as in previous models, the B+ only has ports on two sides of the board. With this new layout comes a few improvements, noticeably the increase of USB ports present, courtesy of the new LAN9514 chip as opposed to the older LAN9512 used on previous models. 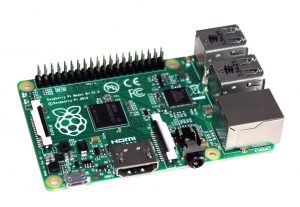 By doubling the number of ports to 4 the B+ can have more devices attached including external hard drives thanks to the ports supporting a higher current, enough for most portable USB2 hard drives. Hot swapping of USB devices is now more stable, a very welcome addition for those that encountered the USB reboot issue present on previous models.

The Ethernet port remains the same as the Model B, running at 10/100. But you will now see that the USB and Ethernet ports are now level on the board, which will be great news for case manufacturers.
Moving further round the board you will see a 3.5mm headphone connector which on the original Raspberry Pi provided audio output only. But for the B+ this connector also supplies video in place of the now missing composite RCA socket, this is thanks to it now boasting 4 poles. To use this new port with your Composite connected TV you will need to purchase an adaptor. Analogue audio output has been vastly improved for the B+ as in the previous Models this was a little under developed.

Moving over the HDMI port, the last port is the micro USB rated for 5V 2A which is connected to a much improved power circuit enabling greater power efficiency, a welcome addition for those using their Pi for robotics where batteries are the norm. The power circuit also provides a greater tolerance for cheaper, under powered power supplies.
For the upcoming official Raspberry Pi touchscreen display and the existing Pi Camera there are the same DSI and CSI ports, but they are now helpfully labelled DISPLAY and CAMERA. 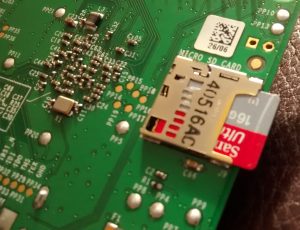 The Model A and B Pi have all used SD cards as their data storage device, but in a smart move by the Foundation they have replaced standard SD with a rather robust and tactile Micro SD slot with a push locking mechanism. With the cost of Micro SD cards coming down in recent years this gives the end user a cheap, plentiful source of cards with full compatibility with all Models of Raspberry Pi.

The previous Model A and B Raspberry Pi came with a 26 pin GPIO, but the B+ comes with a larger GPIO (General Purpose Input Output). Now sporting 40 pins of which 26 can be used by the user, and there are 3 extra GND pins.

The previous Model A and B had 26 GPIO pins, and these pins are still present, with the extra 14 adding to the series of pins. By ordering the pins in the same manner as previous Models the B+ can be used with the majority of the add-on boards currently on the market.

Verdict
The B+ is a refined and well thought out product, it expands the firm foundation of the previous Raspberry Pi models and provides a great middle ground between the 26 GPIO pins of the Model A and B and the 120 pins of the Compute module. The B+ covers many project types and provides everything that advanced users will need for their makes.
Keeping the price in parity with the Model B is fantastic and enables informed purchases to be made with ease.